New Delhi: The world of sports has come to a grinding halt due to the restrictions that have been put in place to stem the spread of the coronavirus pandemic. Everything from Olympic qualifiers, international and domestic athletics tournaments and cricket series have been affected.

The Sports Ministry’s latest advisory that came on Thursday led to suspensions of all training camps until April 15. Exception was given to those athletes who have qualified for the Olympics or are on the verge of qualification and they too have to take permission from their respective sports federation for availing facilities outside of their homes to train.

The Indian men’s and women’s hockey teams are both holed up in the Sports Authority of India’s (SAI) Bengaluru centre. The women’s team was supposed to be having a one-week break which was part of the four-week camp. While a few of them decided to stay at home, the others got to know on Saturday that SAI had decided to cancel their tickets. This included head coach Sjoerd Marijne.

Marijne said that he had a meeting with the players on Monday in which he told them that they have to focus on July 24 — the scheduled starting date for the Tokyo Olympics. “As long as we don’t hear anything else, we keep focussing on our programme,” he said. “They were very disappointed that they couldn’t go home but they understand the situation which is the most important thing.

“You will be disappointed if you don’t see your family for four weeks. They really needed that break. A break is not just physical it is also mental — seeing your family, away from the environment where they always train. So now we have to deal with these kind of things and it is what it is.” 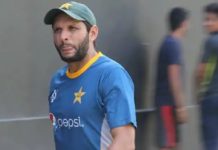 Shahid Afridi tests positive for Covid-19, asks fans to keep him in prayers