Boxing is a combat sport in which two people, usually wearing protective gloves, throw punches at each other for a predetermined amount of time in a boxing ring. Amateur boxing is both an Olympic and Commonwealth Games sport and is a common fixture in most international games—it also has its own World Championships.This year the Karnataka State Boxing championship was conducted at HMT ground in Jalahalli which was organized and hosted by The Karnataka Amateur Boxing Association.

The championship was a 3-day event in which close to 245 participants played from various districts from Karnataka, around 18 teams to name a few were Sports Authority of Karnataka(SAK), Air Force team, Inspire Institute of Sports popularly known as JSW.

The most number of gold medals by girls in all the teams were taken hands down by The Sports Authority of Karnataka under the training of Mr. Sourav Guha who is an IBA star 2 coach, also the current Indian camp coach. His girls managed to get 7golds and 1 silver which is the total number of girls that participated from his team.

Not to forget his boy’s too performed excellent in this tough championship, his student Mohammed Rayyan won the Best Technical Boxer Title, Kishan Raj won the Best Loser title. Chandra Bahadur Tamang, on the other hand, won the Best Stylish Boxer from HBCC club.

Displaying unrelenting determination, a boxer youth from Karnataka’s Belagavi swam 2.5 km across his flood-hit village to attend a state-level boxing championship in Bengaluru. 19-year-old not only reached the championship event on time, he even won a silver medal for his performance.

The state-level tournament was only possible because of the unmatchable efforts of the KABA who’s secretary and President left no stone unturned. The state-level tournament was conducted after a gap of 4 years and this year was more than a success. The competition promised the beginning of technical, smart and efficient boxers who will for sure bring glory to the state, the nation, and their families.

PAN instant allotment facility launched: Here’s how to get PAN in minutes 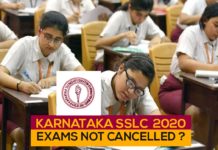 Karanataka SSLC exam 2020 to be cancelled?

Schools in Karnataka likely to reopen on July 1

PAN instant allotment facility launched: Here’s how to get PAN in...

Karanataka SSLC exam 2020 to be cancelled?

Schools in Karnataka likely to reopen on July 1

5 Tips to stay healthy this monsoon