Then Assembly speaker KR Ramesh Kumar had disqualified these 17 MLAs of ruling the Congress-JD(S) coalition ahead of a trust vote in July.

The Supreme Court on Wednesday upheld the disqualification of the 17 Karnataka MLAs on the orders of the then Assembly Speaker KR Ramesh Kumar but allowed their plea to contest the by-election to be held on December 5 for the seats that fell vacant in July.

A three-judge bench of justices NV Ramana, Sanjiv Khanna and Krishna Murari held that the Speaker was not empowered to disqualify the lawmakers for the entire tenure of the term, which lasts until 2023.

Speaker couldn’t have barred the MLAs for any term. Speaker doesn’t have the powers,” the court ruled, in a judgment that will likely set the tone for how the resignation-disqualification conundrum that threatens to derail the Tenth Schedule is dealt with in the future.

The Speaker had disqualified these MLAs from the 16th Karnataka Legislative Assembly on July 25 and 28 this year under the Tenth Schedule, or the anti-defection law, and also barred from contesting elections during the tenure of the current Assembly.

The judgment is a big boost for the BS Yediyurappa government in the state as the MLAs — 14 from the Congress and three from the JD-S — were hopeful of being given tickets by the BJP to contest the by-elections to 15 seats.

The lawmakers had quit the Assembly as part of a BJP attempt to topple the government, and the Congress and JD-S had sought the MLAs’ disqualification, and a bar on their contesting elections.

The MLAs had stayed away from a trust vote, defying their party whips, leading to the collapse of the HD Kumaraswamy-led Congress-JDS government and paving the way for the BJP-led government in the state under B S Yediyurappa.

By-polls to 15 out of these 17 assembly seats which fell vacant following the disqualification of MLAS are scheduled on December 5 and candidates are required to file their nomination papers between November 11 and November 18.

Reacting to the order, Congress leader Dinesh Gundurao told CNN News18 that the decision was on expected lines. “All MLAs will face the music from the people… we welcome the verdict and it’s a good verdict. We are very confident of doing very well in the bypolls… The BJP itself is divided and our people are geared up to face them head on,” he added. 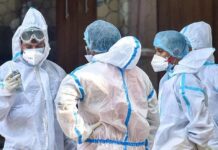 PU teachers threaten to boycott exam if not vaccinated