People in 16 districts have been affected; as many as 10,038 houses damaged due to rain

Karnataka Rain- Even before the State could rehabilitate and compensate victims of floods that ravaged more than half the districts in the State, fresh bout of rain that began on October 18 has taken 13 lives and damaged 10,038 houses.

The fresh spell of rain, which has hit 16 of the 30 districts, has forced 7,220 people to take temporary accommodation in relief centres. According to the data released by the State government, Koppal district accounts for four deaths while Belagavi and Haveri districts have witnessed two deaths each. One death each has been reported from Bagalkot, Dharwad, Raichur, Chitradurga, and Davangere.

As many as 150 head of cattle have died in different districts owing to heavy rain. Of the 10,038 houses that have been damaged, 206 are completely devastated while the rest are partially damaged.

The deputy commissioners of these affected districts have ₹1,027.54 crore to take up emergency relief works, an official note stated.

The outflow from all the major reservoirs in the Krishna and Cauvery basin areas have been increased as the storage level has either reached or about to reach full capacity. As many as six teams from the National Disaster Response Force besides an army column have been deployed in six northern districts to carry out rescue and relief operations. 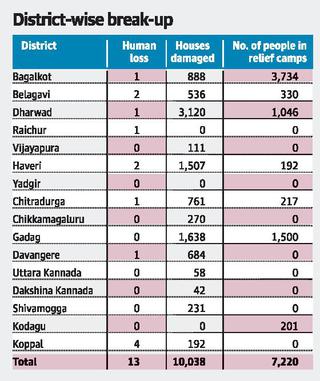 India Meteorological Department’s forecast indicates scattered and moderate rain in north-interior Karnataka districts of Belagavi, Bagalkot, Dharwad, Gadag, Haveri, Koppal, and Ballari for the next two days. Heavy rain is also expected in some isolated places in this region.

The fact that Upper Krishna catchment areas in Maharashtra have received widespread and moderate rain in the past 24 hours has caused concern in Karnataka.

According to the IMD, Upper Krishna basin in Karnataka is likely to receive widespread and moderate rain and heavy rain at isolated places in the next two or three days. IMD has issued orange and red alerts for the next three days in coastal and Malnad regions, respectively.

CBSE, CISCE thinking of reducing syllabus by 50%, delaying board exams